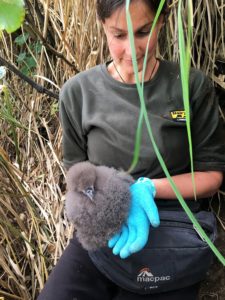 The dream to restore seabirds to Karioi Maunga came a step closer when a burrowscope used to survey seabird burrows along the Karioi coastline produced a pleasant surprise – a recently hatched Grey-faced Petrel chick!

Auckland University students assisted the Karioi team when they recently brought along their burrowscope to check the contents of the coastal burrows. A burrowscope is similar in design and function to an over-sized endoscope and is widely used in conservation research and management in New Zealand, particularly in studies of burrow-nesting seabirds. 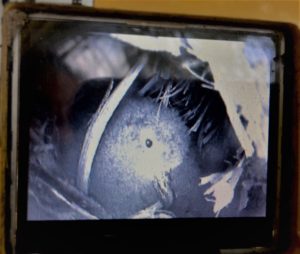 Chick in burrow using a burrowscope

While the burrows have been intensively managed by the Karioi biodiversity team during the last few months it was an amazing surprise to discover a total of five healthy chicks. Karioi Maunga Project Manager and A Rocha Aotearoa New Zealand Co-Director, Kristel van Houte, said “These are the first chicks that we know of to have survived this long into the breeding season for many years. It was a super exciting and very emotional moment to finally see chicks happily tucked away in their burrows after many years of hard work. Implementing large-scale intensive predator control along the coastline and across Karioi Maunga has contributed to this success – an achievement that everyone involved in the project to date can be really proud of!”

Aotearoa New Zealand has an amazing diversity of seabirds. About one-third of the world’s 348 seabird species are found in New Zealand waters. At least a dozen species of petrels bred on the mainland islands before humans arrived, but almost all have become restricted to offshore islands due to predation by introduced rats, cats, stoats, ferrets and pigs. One of the few petrel species still breeding on the mainland is the Grey-faced Petrel. Whāingaroa residents are extremely lucky to have them.

Thanks to Waikato Regional Council, WWF New Zealand, Tindall Foundation and Department of Conservation for supporting our monitoring and predator control work.