Let’s free the plants to grow

It’s a November Saturday and across the wetland we hear a grey warbler burble, interrupted by the whirr of wings of a female pheasant that lands across the stream. Another pheasant rasps its metallic call. John Staniland is explaining the task to volunteers, most of whom are from Windsor Park Baptist Church, Auckland. 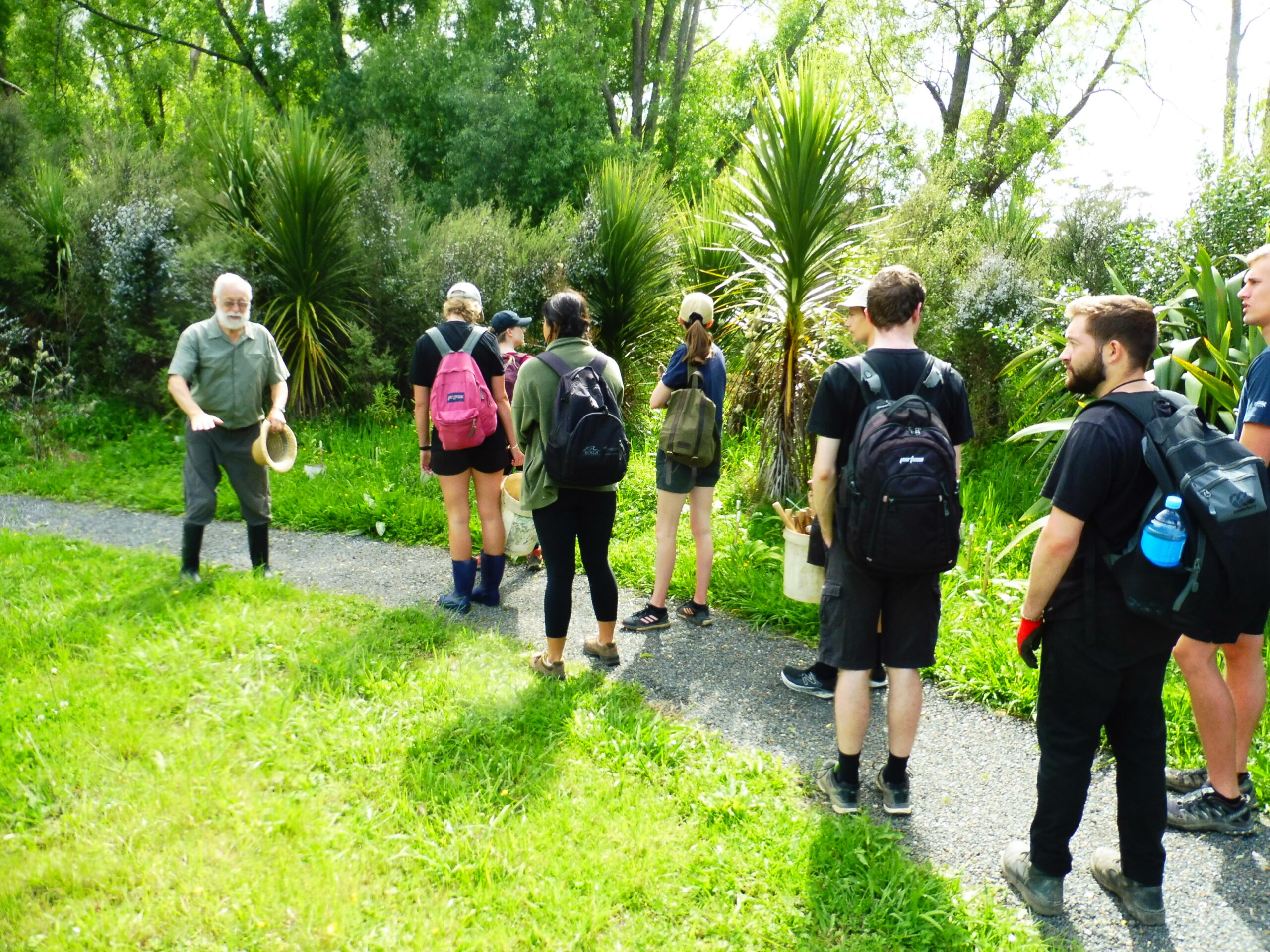 John Staniland coaches the team for the task.

“See that convolvulus on the small titoki tree. That could stunt its growth. Here’s a kahikatea, one of the tallest trees in the New Zealand bush, but this little thing can’t even get going because it’s smothered with grass and weeds. Our task is to ‘release’ them—free them by pulling away the weeds so the semi-strangled plants can shoot away in the summer.

“Watch what we do with this ‘shark’. (It’s a Japanese curved knife with sharp teeth like a shark.) Feel under the weeds and pull back with this blade. Here we go, freeing a nīkau palm, now some carex sedge. Here’s a mānuka. It needs sunlight more than almost every other plant in the bush.”

A pīpīwharauroa (shining cuckoo) whistles but we can’t see it at all. Cuckoos are like that. Now a kōtare (kingfisher) clacks out a noisy message. At Matuku Link on the edge of the Waitakere Ranges we’re joining a project Auckland A Rocha helps with. Today a young adult group is releasing seedlings and also planting sedges and willow herb.

“I like being in nature,” smiles Jonathan. “I’m learning new things like mānuka and tea-tree are the same thing. And I like working this “shark”. It’s super-efficient.” 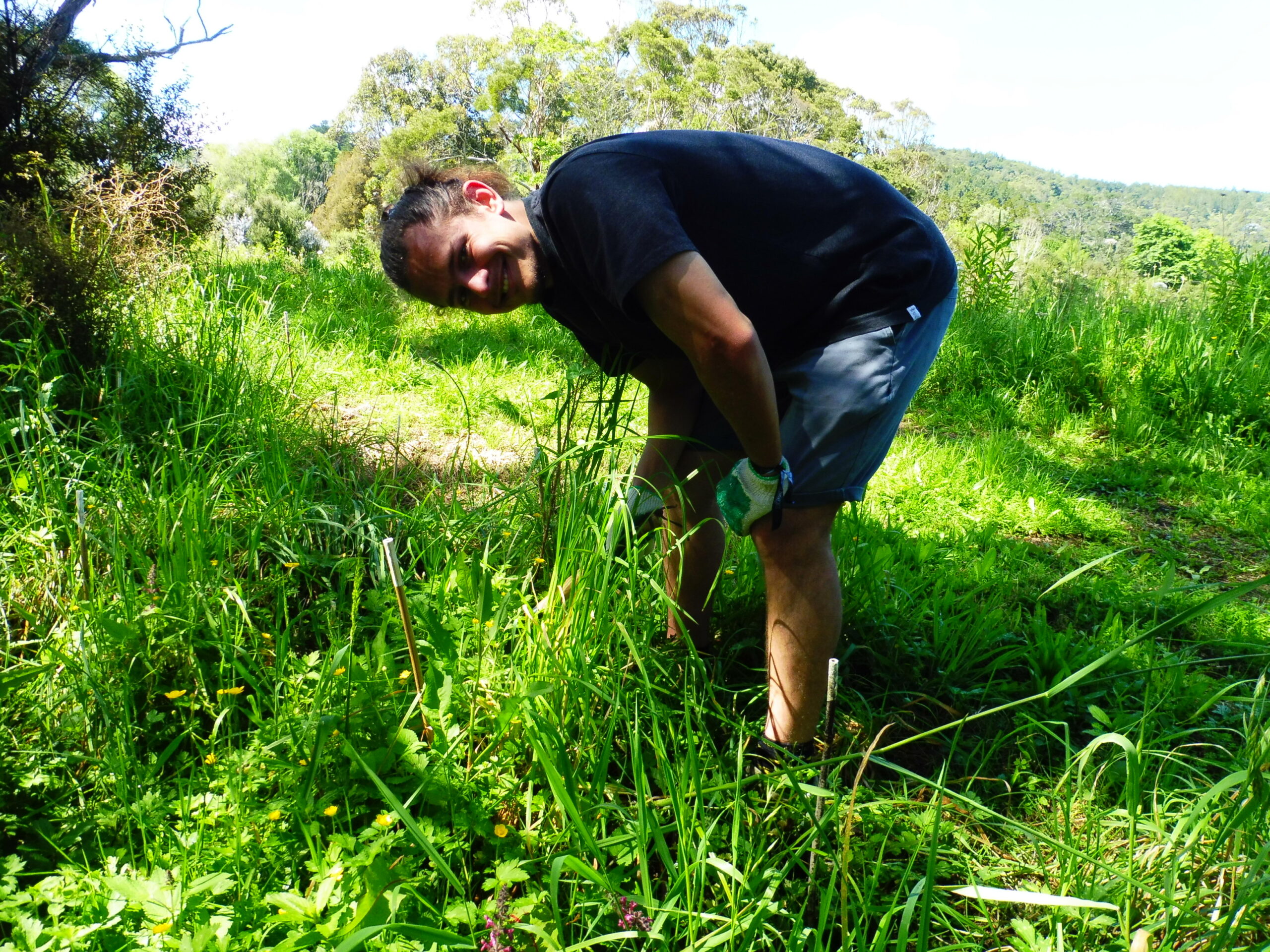 Crouching over her work, Emma comments, “This is therapeutic. I haven’t planted before and it’s really cool to come. And I like hearing of the people who had the vision to start restoring this wetland.” 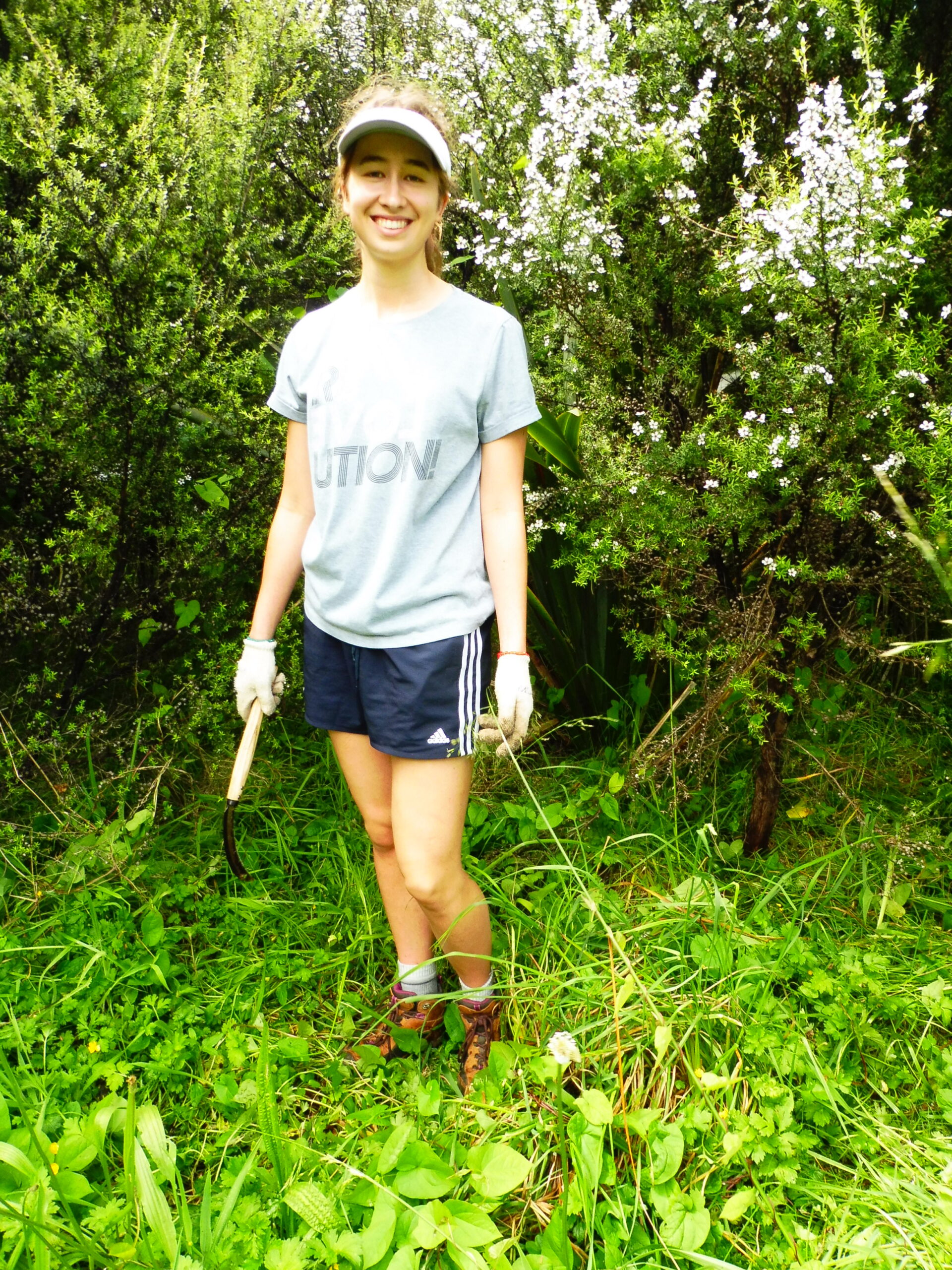 Emma with a ‘shark’.

We seek out Aidan Wivell who has motivated his friends for this working bee. “We wanted to get into conservation, getting hands dirty with Creation Care,” he says. “That’s part of the ‘mission of God’. I like it that today with A Rocha is not just talk. We’re doing something. We are called to look after the world God made and it feels good to get on board with other Christians who care about environment too.” 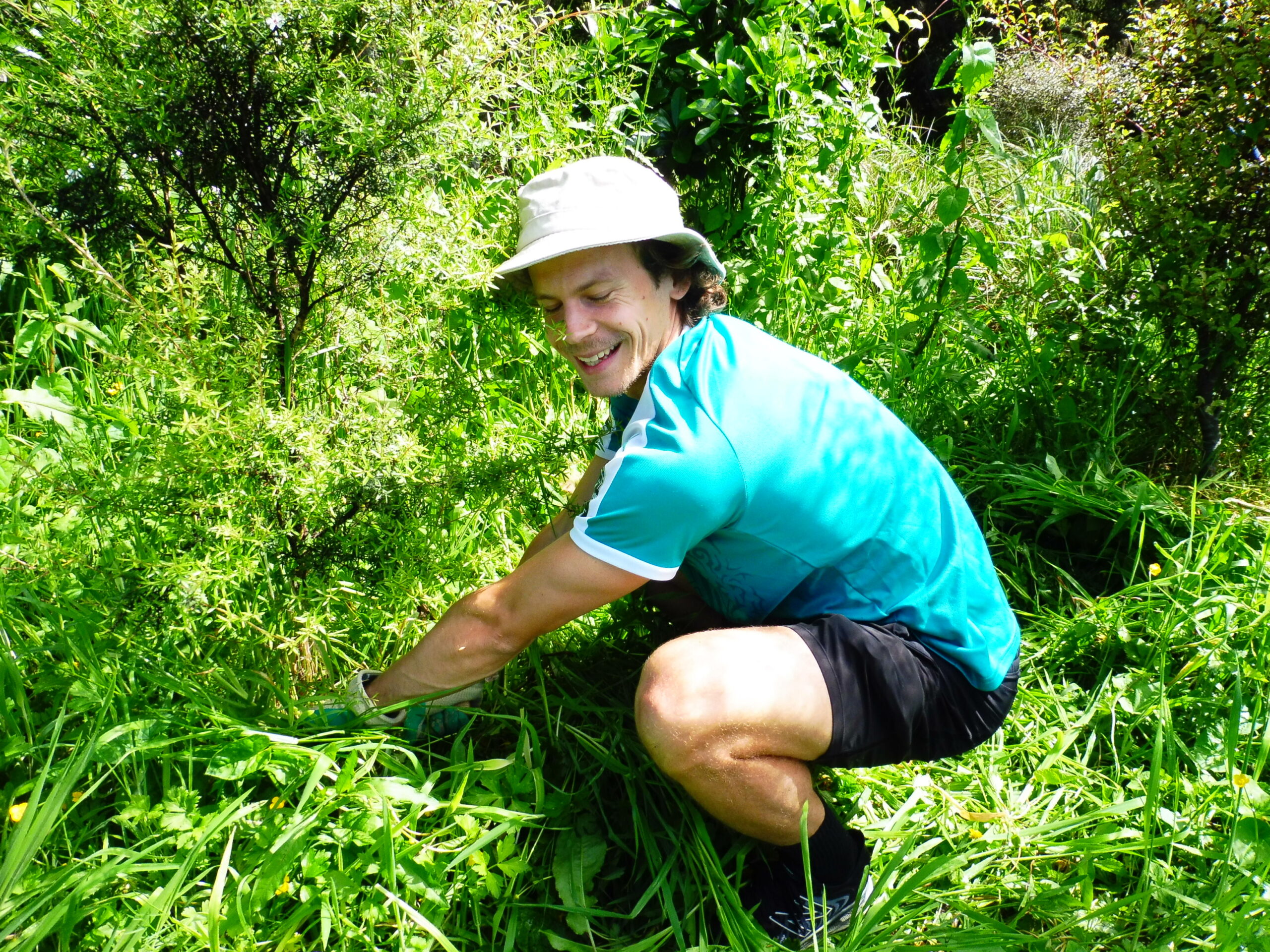 Aidan takes out weeds that were smothering plants.

Next, we find Lydia and Charis balancing on a bank above a moat, planting sedges and willowherb. Wetland like this has been seriously disadvantaged by human activities—only 9% is left. These young women have cheerfully worked through the morning along the edge of the swamp. They treat the mud with enough respect to avoid falling in, while working towards a healthier marsh for creatures made by the Creator. 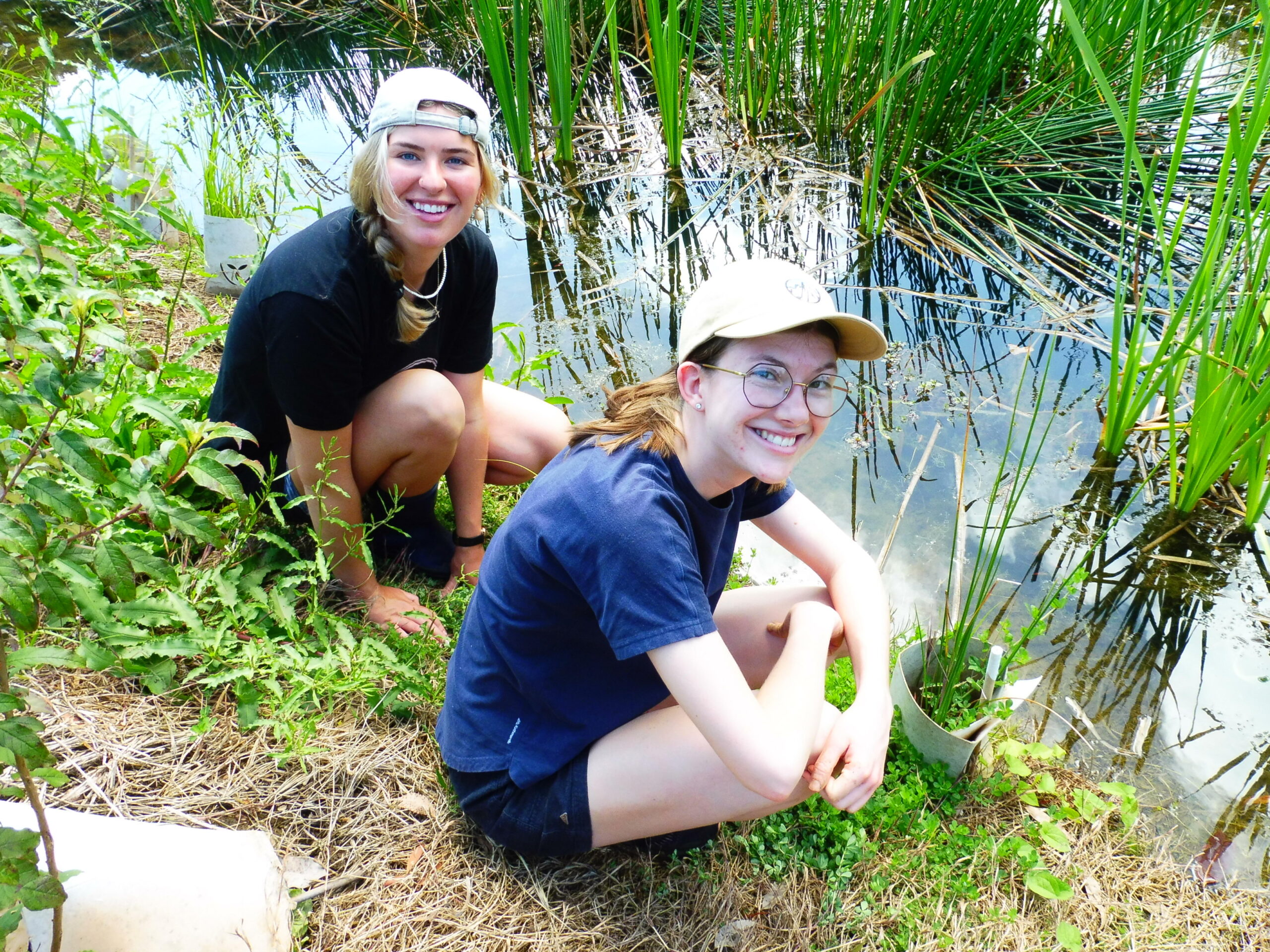 Lydia and Charis above the marshy moat.

The volunteers finish their task well-satisfied. Emma has already voiced her positive angle, “It’s really cool to come and learn. We’re doing some good although we are new to it. It’s encouraging.” 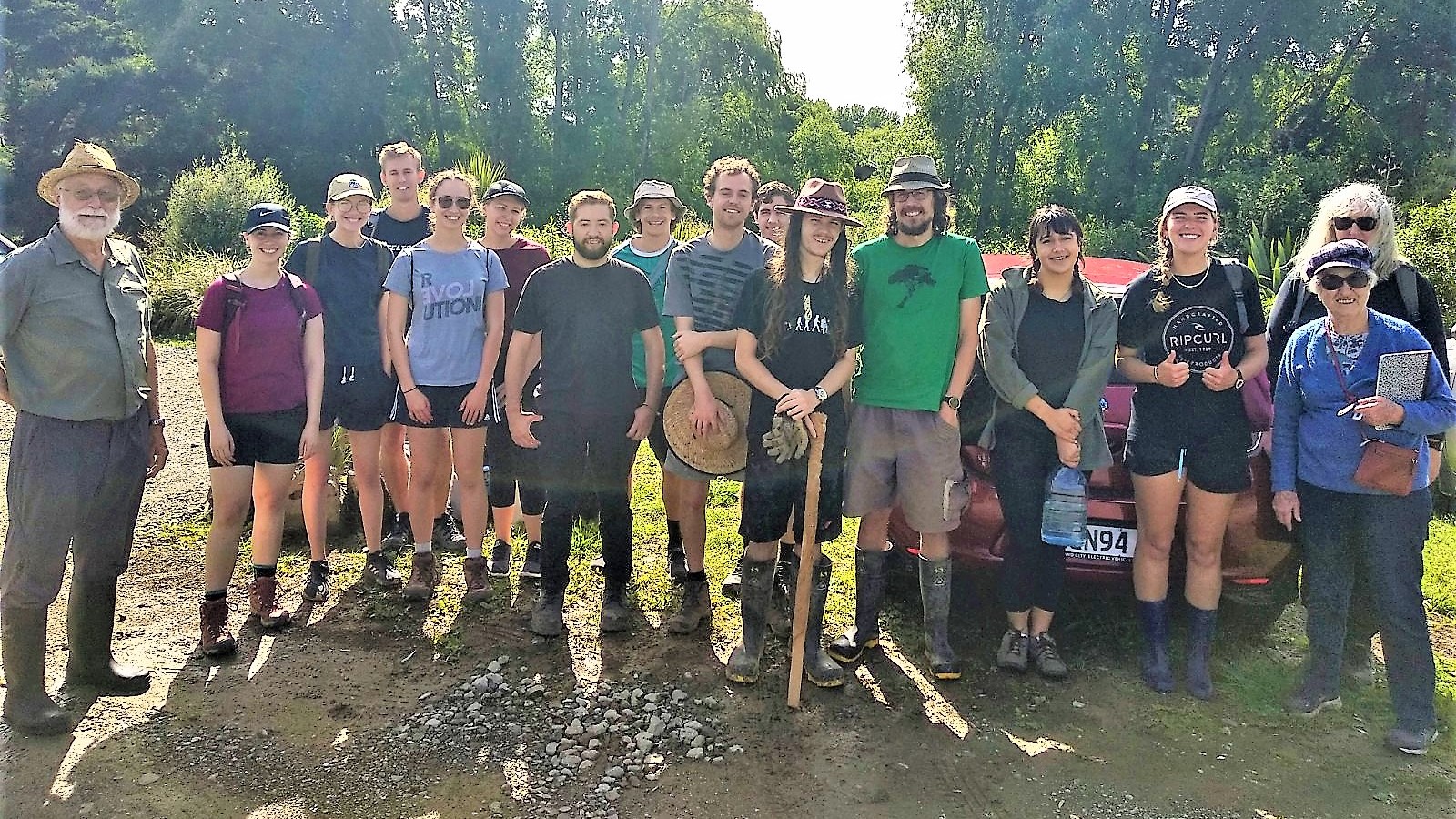 Volunteers at the A Rocha working bee at Matuku Link. [Photo: Sarah Woodfield]